Blog - Back to Basics! Basic Colors and Beautiful Gems

Back to Basics! Basic Colors and Beautiful Gems 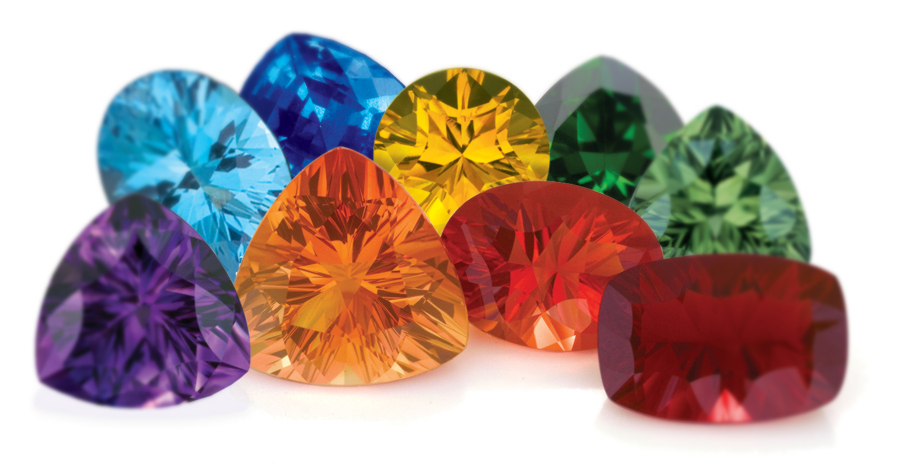 It’s August, and students are heading back to school. It’s a great opportunity for us to refresh on some basic knowledge, like what all gems have in common —Their colors! Each gem and color have their own qualities, and it’s surprising how many share similarities. In this article we’ll look at six different colors and gems’ traits, as well as their history!

Let’s start with our first color, red! Red signifies strength, power, and energy. The word red translates as ruby in Latin, and while ruby is a great example of red, we want to take this chance to show off our natural rhodolite garnet in all its glory. On the Mohs scale of hardness, garnet is a 7.5, which is only two and a half down from being as hard as diamond.  With the durability of garnet and red’s reputation for being a strong color, you have a power couple – literally.

Moving along, we have the warmest color- Orange! Orange is the color of the warmest sunsets, autumn leaves, and one of our favorite opals, the Mexican fire opal. Orange is a very warm color, which means it’s also extremely inviting. The fire opal goes from a midday yellow to a deep orange sunset color. It’s a 5.5 on the Mohs scale, and just like any other opal requires a little more care than other gems. It’s worth that extra effort though, as it’s a beautiful gem to have.

Yellow is a lot like orange, as it’s a warm color that makes people happy. However, with yellow it’s easy to feel cheery and happy-go-lucky, as opposed to orange’s more relaxing tone. Yellow has always been a color of happiness: Every memorable smiley has always been yellow. That may be why yellow citrine is our choice for yellow; it’s pleasing to the eye, and being a quartz, very durable. Citrine is usually pale amethyst that’s had its purple removed and gained sunny undertones from heat treatment. It’s a 7 on the Mohs scale as well, making it an easy to care for gem.

Green is a great color, most prominent in nature. It’s no wonder that some of the best gems are green ones, just like our Imperial Diopside®. Green is known for being peaceful, calm, and tranquil. And opposite of the Mexican fire opal, diopside is known for being calming. As it’s a natural green, it fits in wonderfully with mother nature’s landscapes: This diopside’s green is just as deep and lush as the deepest forests. Imperial Diopside® is mined in Northeastern Siberia, Russia. But why is Imperial Diopside® called Imperial? Simply put, it’s the best chrome diopside. Imperial Diopside® is found in the same formation that produces Russia’s coveted diamonds; Isn’t that amazing? It’s also the highest quality of diopside available. Each gem is handpicked, and the green is all natural. To top it off, the last Tsar of Russia, Nicholas II, had two royal colors. One of them was red, while the other was—you guessed it—Imperial green!

Next is blue, which is known for being a very cool, reliable, and intelligent looking color. It’s why a lot of people wear blue suits, as opposed to black. Our sky-blue topaz gives us an exquisite blue to cool even the hottest days. Blue topaz is colorless topaz exposed to irradiation and heat. While it can take years to create, what comes out of it is worth the wait. It’s mined in many places: Brazil, China, Nigeria, and Sri Lanka. Blue topaz was also known for helping people in tough times. For example, changing color around poisons, improving eyesight, and many more. (we don’t recommend using topaz to identify poisons, however.)

Everyone knows that purple is a great color for royalty. Ask Queen Elizabeth the first, who wouldn’t let anyone but the royal family (and some close members) wear it. It’s rare, gorgeous, and a color that anyone can wear to feel regal. Amethyst is all of that, but — luckily — not so rare. Being a quartz, Amethyst is 7 on the Mohs scale and extremely durable; So, you don’t have worry about your favorite jewelry’s gemstone breaking. To top it off, since Amethyst comes in large qualities there’s more variety of cuts for it.

Each gem and color goes uniquely hand in hand. While it’s common knowledge that all gems are magnificent wonders of the world, it’s good to refresh on their qualities and some fun trivia along the way.

Please select the Wishlist you want to add Product